This is my Bomber Crew Diary.
My third Devil's Bombers team that I'll start from the scratch. This time my bomber crew will have familiar names. Exciting tales of courage and other drama waits for these Devil's Brigade's Magnificent 7 who have joined the RAF and are flying Lancaster-bomber DB-03.

Volunteers to join this crew, if any of these poor chaps would die? 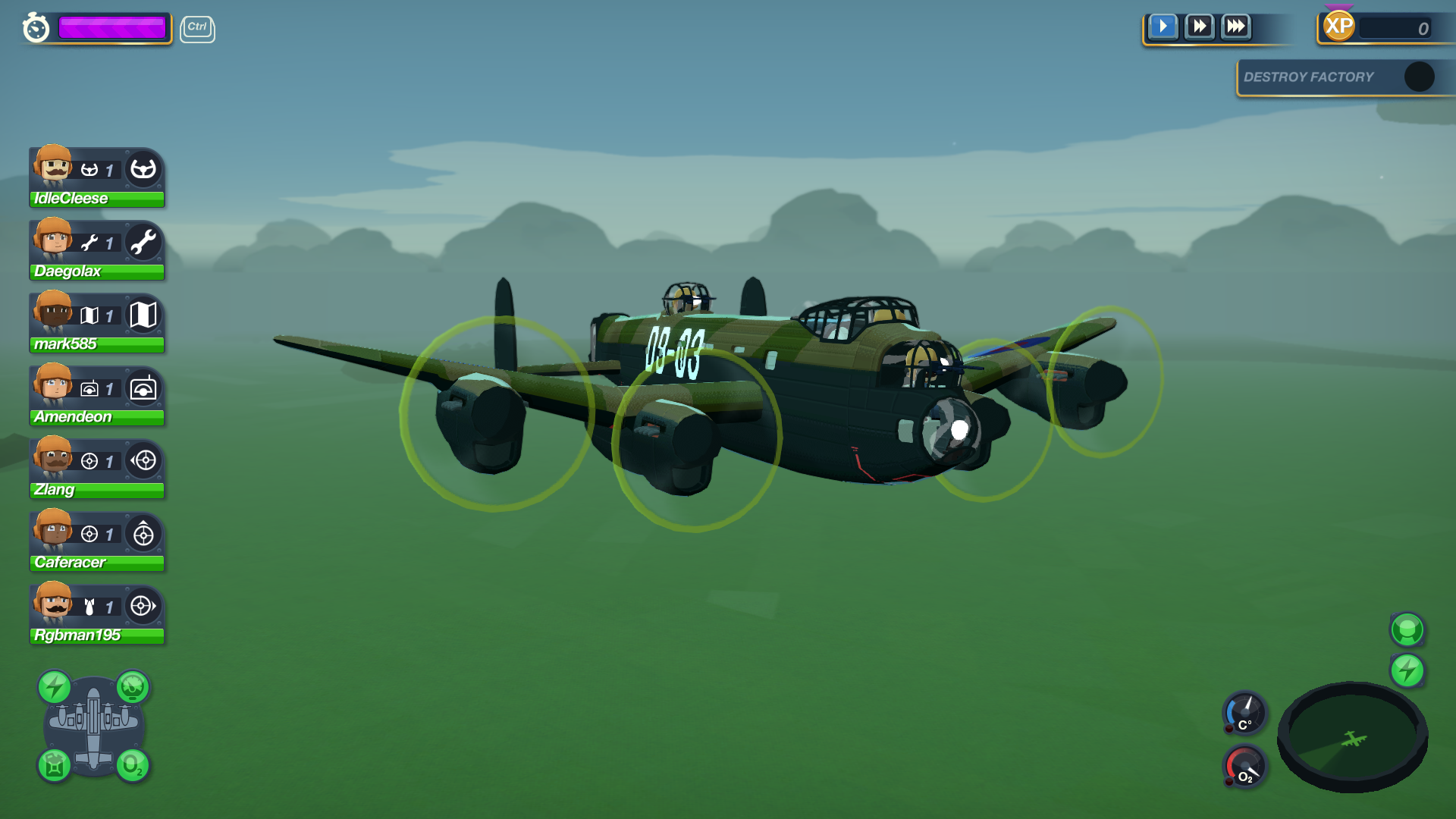 Mission 01
Captain's log. Our first bombing mission was successful. Enemy fighters were harassing us from the beginning and we lost great deal of blood. Amendeon was slightly wounded but he recovered after some rest. Caferacer took some pounding from 109s, but he managed to fend off the attackers. During the return back to base port side engine caught fire, but we managed to extinguish the fire and engineer Daegolax climbed on to the wing and fixed it: "Good show!" 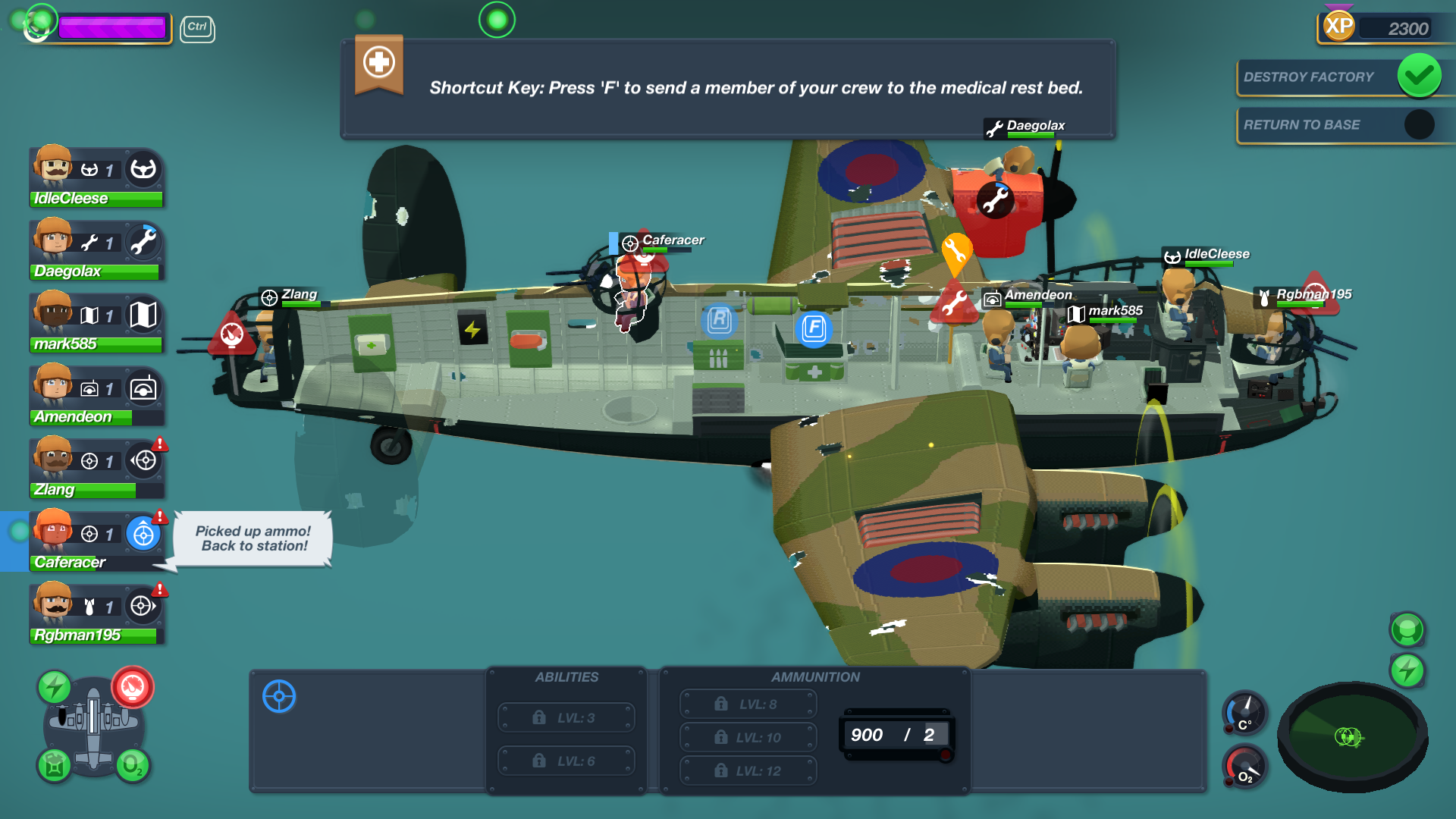 We returned back to our home base and earned some £ and we bought boots and warm gloves for everyone -Huzzah! 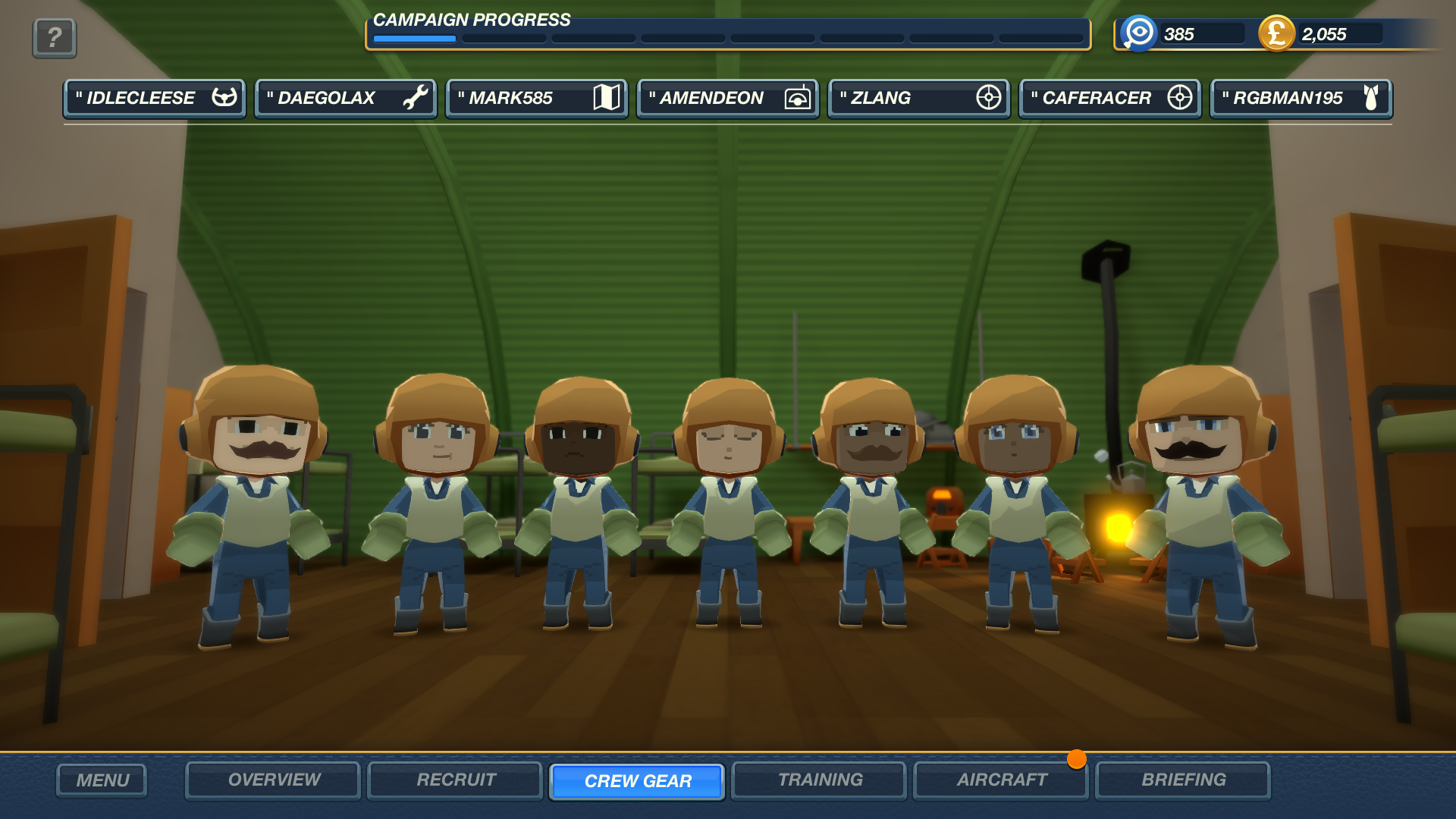 Until next time tah-tah!
Top

In my first game my plane crashed 2 times and both times Amendeon and Daeqolax survived while everyone else died.

Now I am playing for second time and my squad is: Anssi pilot (great skills btw, he landed plane that had only one gear down without crashing), Amendeon singer or radio man, Daeqo engineer and second gunner, Rurjevit navigator and second engineer, Zlang tail gunner ofc, Matziti central up gunner and Piri main bomber and gunner.

Tip to Anssi for engineer: buy equipment box in middle of plane and equip with parachute. Don't send poor Daeqo outside on tails to repair fuel leaks or engines without parachute because if he falls off...

Right-O! Did some adjusting and now we do have a parachute for Daego, if he ever again needs to climb out. Only one chute per plane chaps. Don't want any desertion on board my plane. No sir!

Captain's log. Our mission was to seek and destroy enemy subs. Bombing was excellent again so we decided to take some recon photos. When we flew deeper into the enemy territory we were attacked by enemy fighter squadron and had difficult times when heading back to base. Some small drama happened during the exchange of bullets. Caferacer was shot, but thanks to Daegolax's urge to fix things Cafe was saved. Daego took a medic box and healed Cafe before he was a deceased gunner. So once again Daegolax saved the day!

Marvelous show and now some pics. 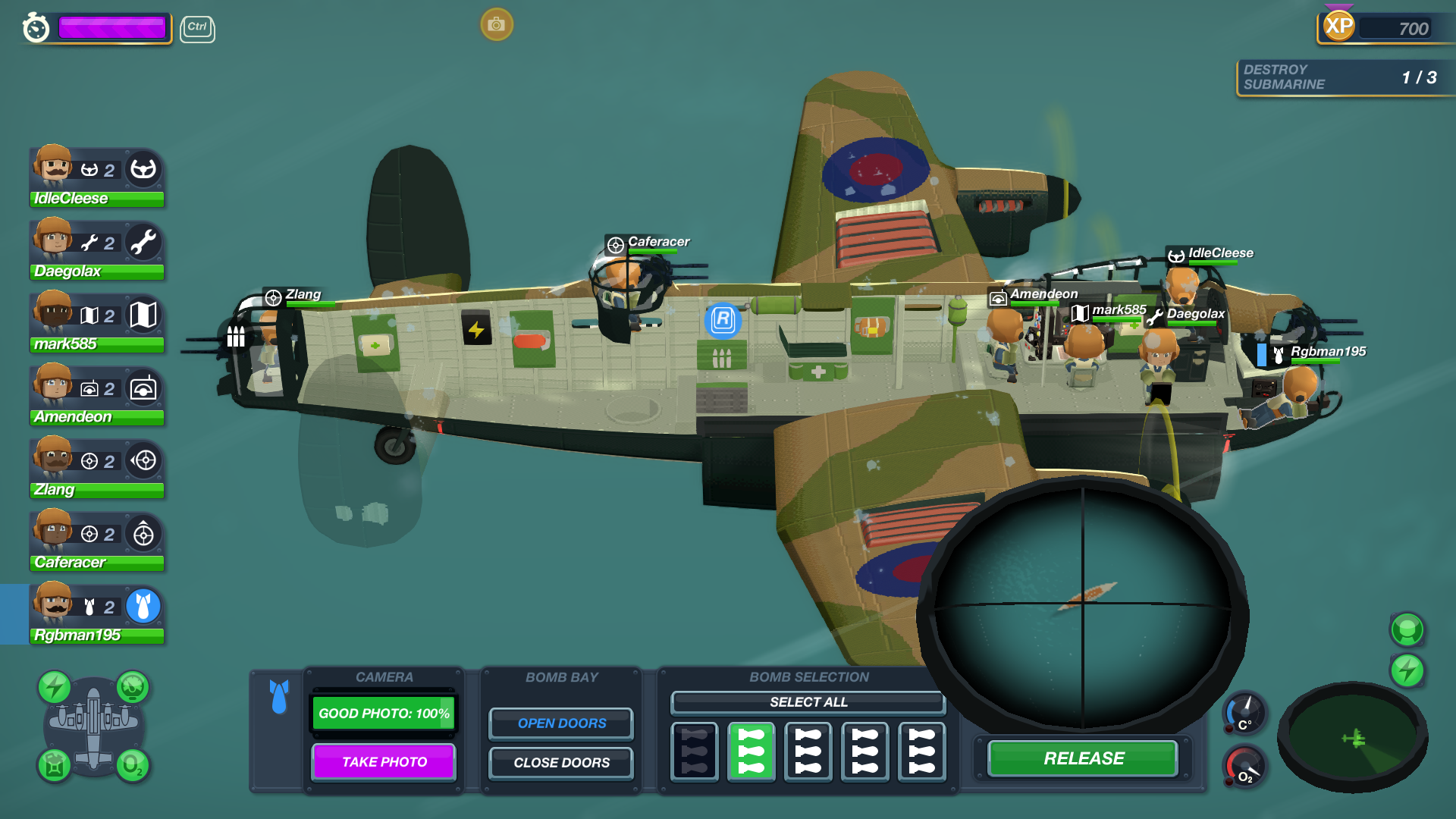 Sinking the U-2 "Bon voyage Bono!" 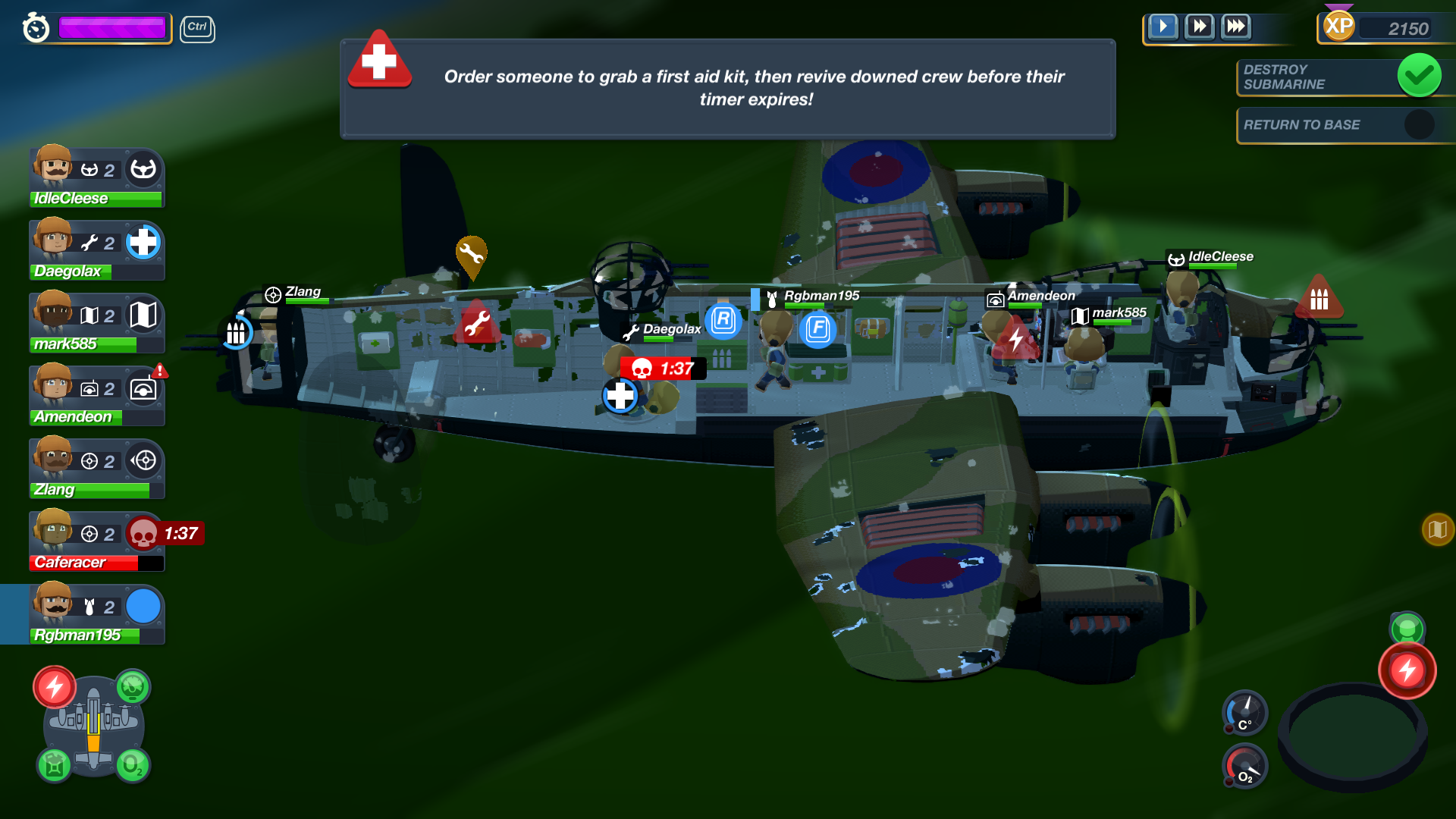 Daegolax saves Caferacer "Would you mind checking the leaky electronics while you're back there?" 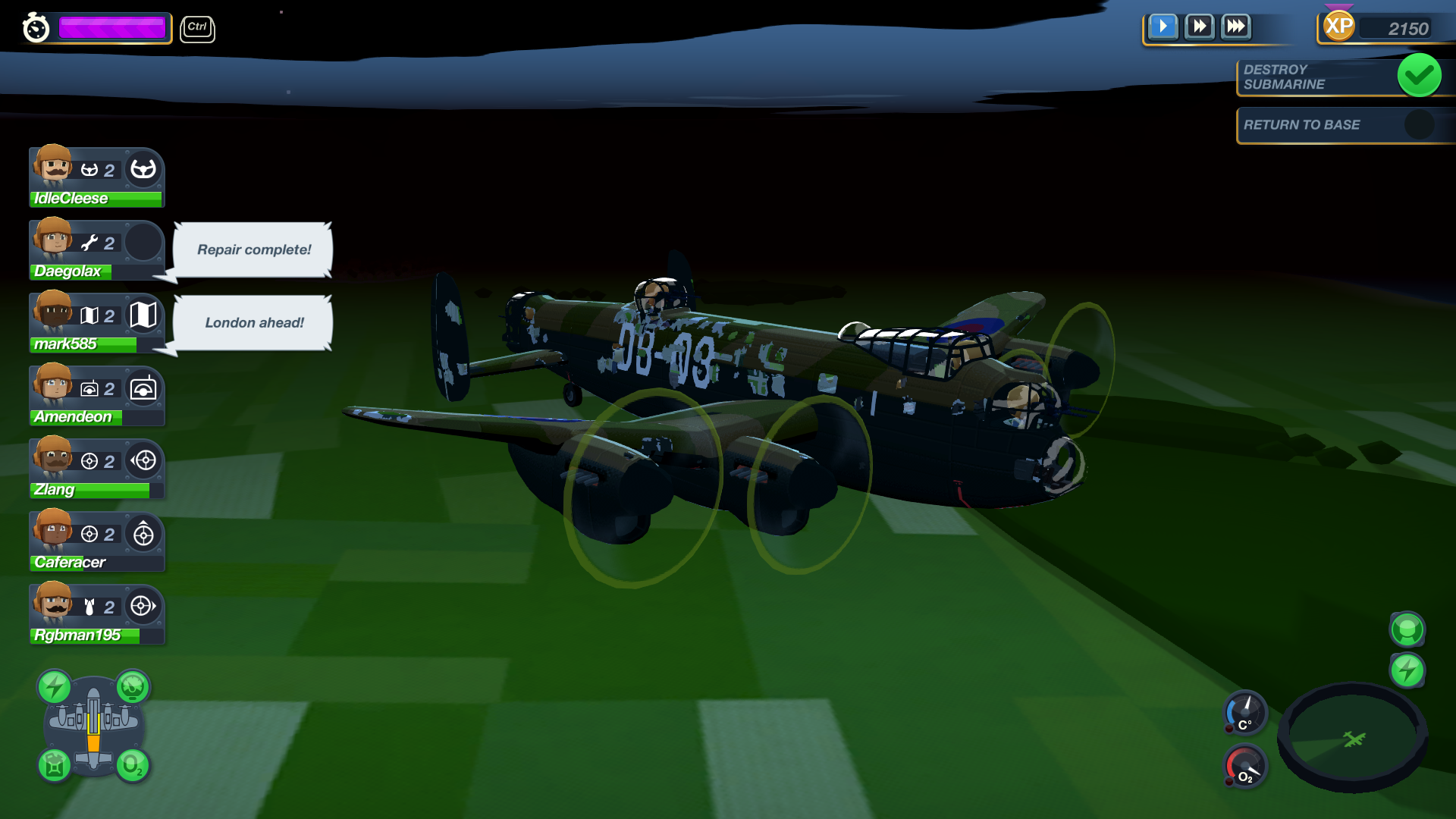 Our Lancaster is Swiss cheese
Top

Sigh, left to do the dirty work in a game I personally don't even play

Well this part of our forum is a lot more amsuing than H&G whine fest, keep it up as I'm subscribing

i cant believe you give Mark such hard tasks. poor guy will die from stress
Top

Mission 03. Captain's Log. Third mission and during the briefing our commander informs us there's an enemy ace spotted over the Canal. Blast! Zlang and Cafe will take care of him for sure, if he comes to our six. Our mission is to drop supplies to a downed spitfire pilot. Precise low altitude drop that rgbman surely can deliver. Our mission starts with technical difficulties when our electronics fail again during the approach. Daegolax shows his skills of using wrench and fixes the faulty fuse. We encounter the enemy ace Felix Feder and after a long firefight he rolls and returns to France tail between his legs. Zlang scared him off for good -Huzzah!. We shot down one squadron of 109s and dropped tea and biscuits on target. Good show! As a reward I spend some £ on crew equipment. Idle has a hat and Daego has a cap that should make him move 5% faster. Zlang and Cafe got their helmets for protection. 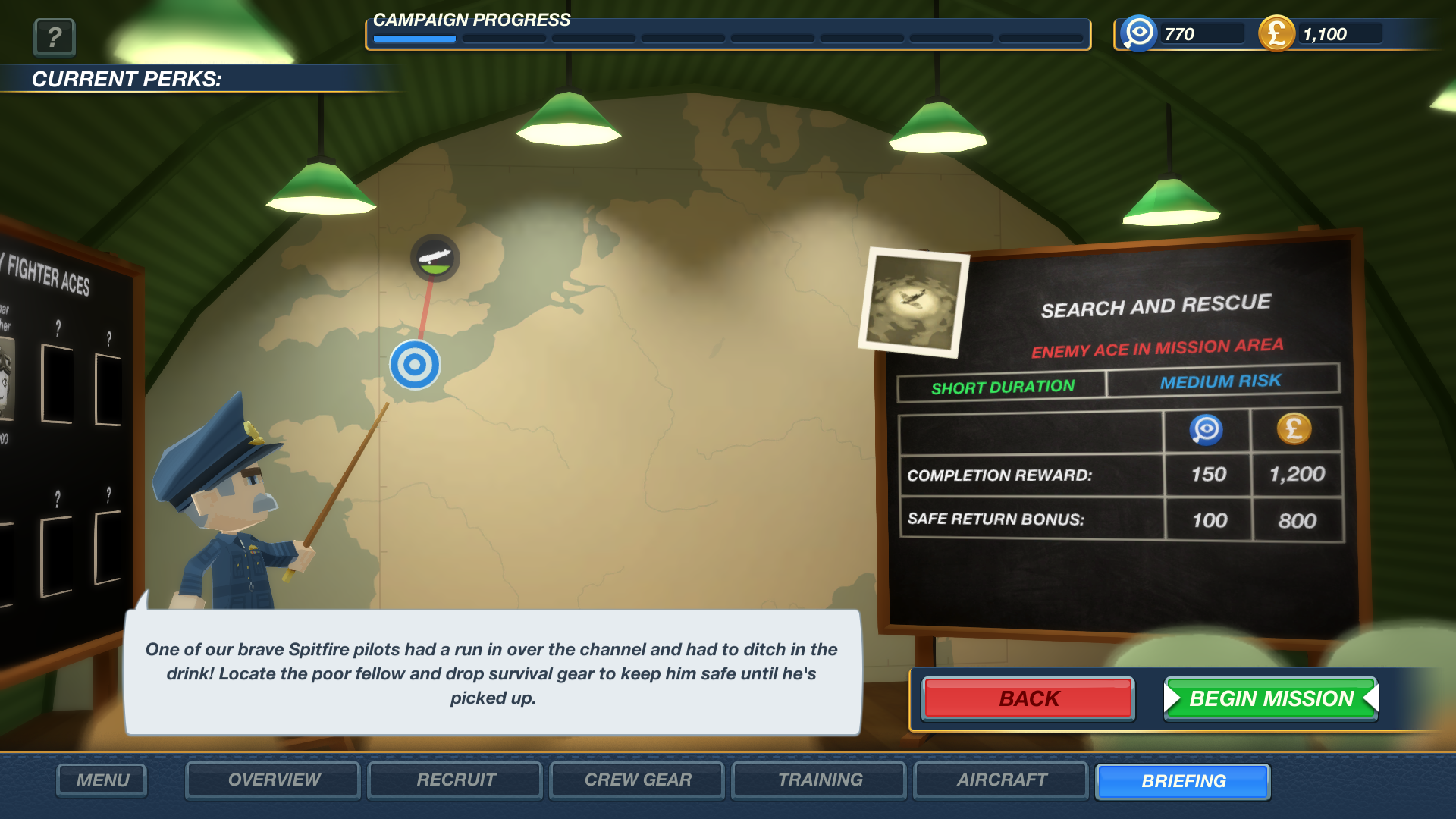 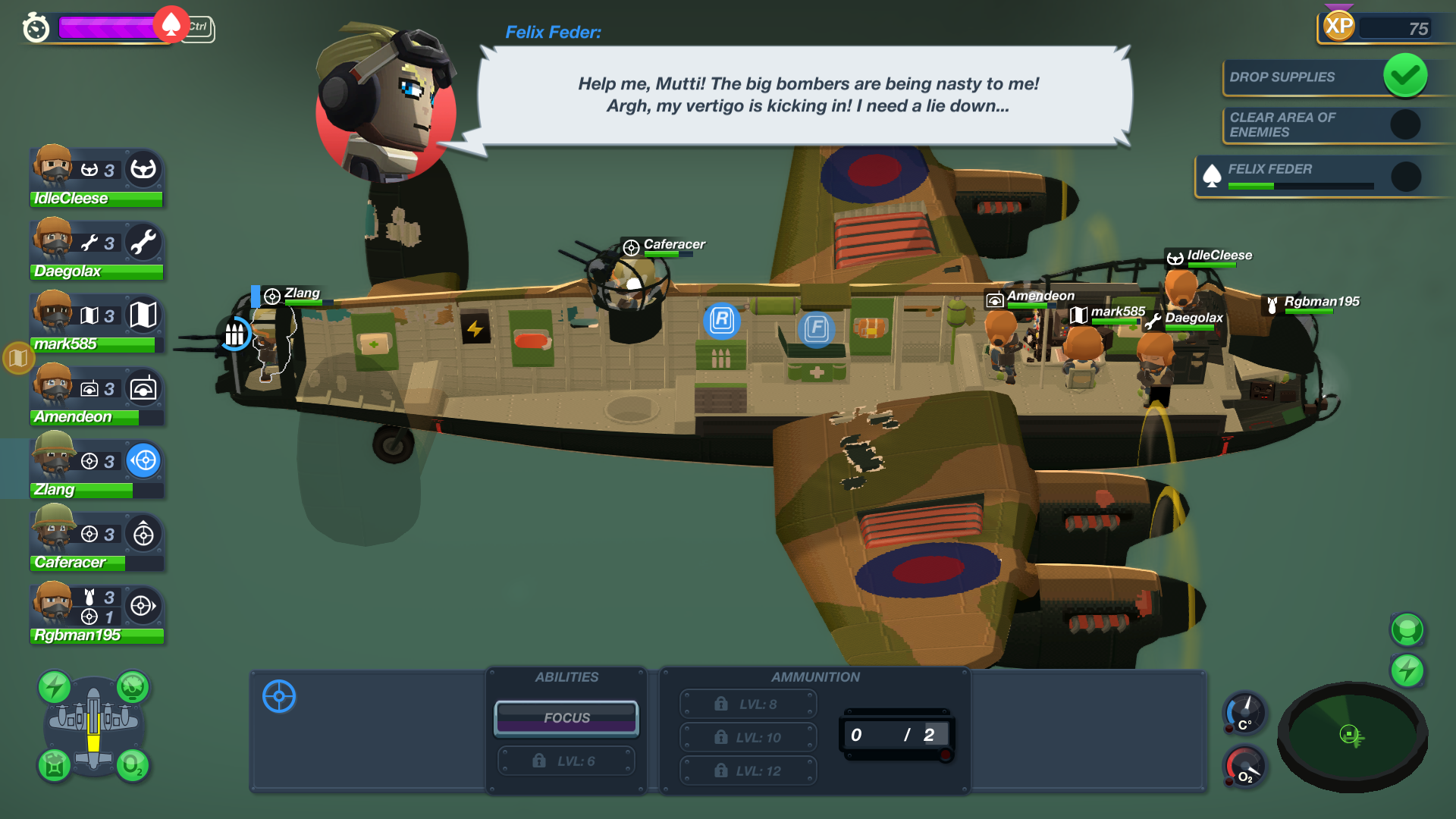 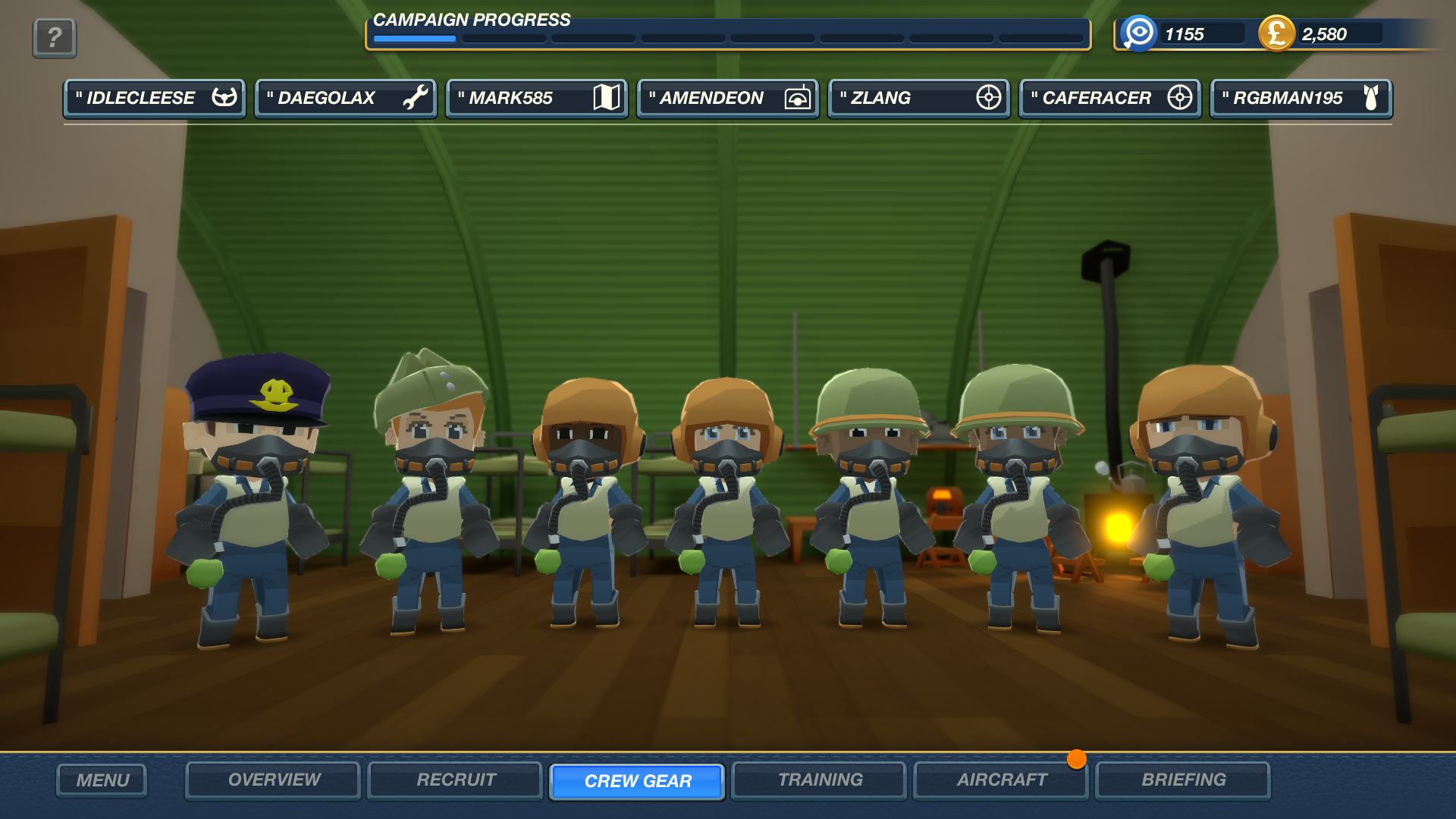 Mission 4. Captain's log. Our fourth mission was easy-peasy factory bombing lemon squeezy near the coast. Fighter planes were harassing but we managed to deliver the bacon and eggs fast and turned back to England. Zlang protested, 'cause he wasn't able to shoot down the last fighter squadron. Note: Our gunners need faster spotting from the radio-operator, but unfortunately Amendeon's skills are very limited and fighters attack always when we start the bomb run. Those enemy fighters had their moment, when we were focusing on bombing: our port side wing and engine got some serious damage, before our gunners had their targets ready. Daegolax put out port side engine -fire with our new automatic fire-extinguisher system so we didn't need to send him out. 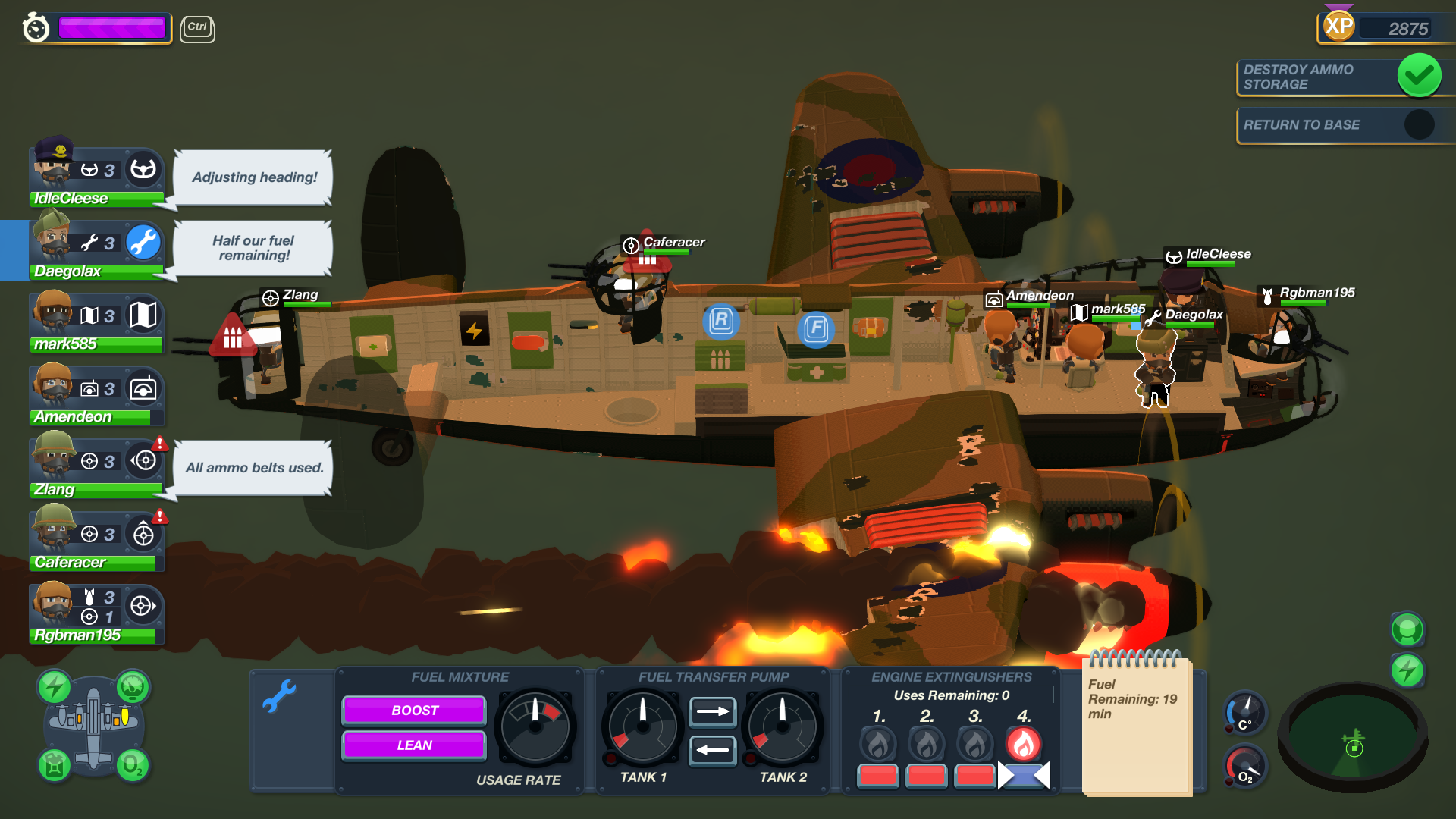 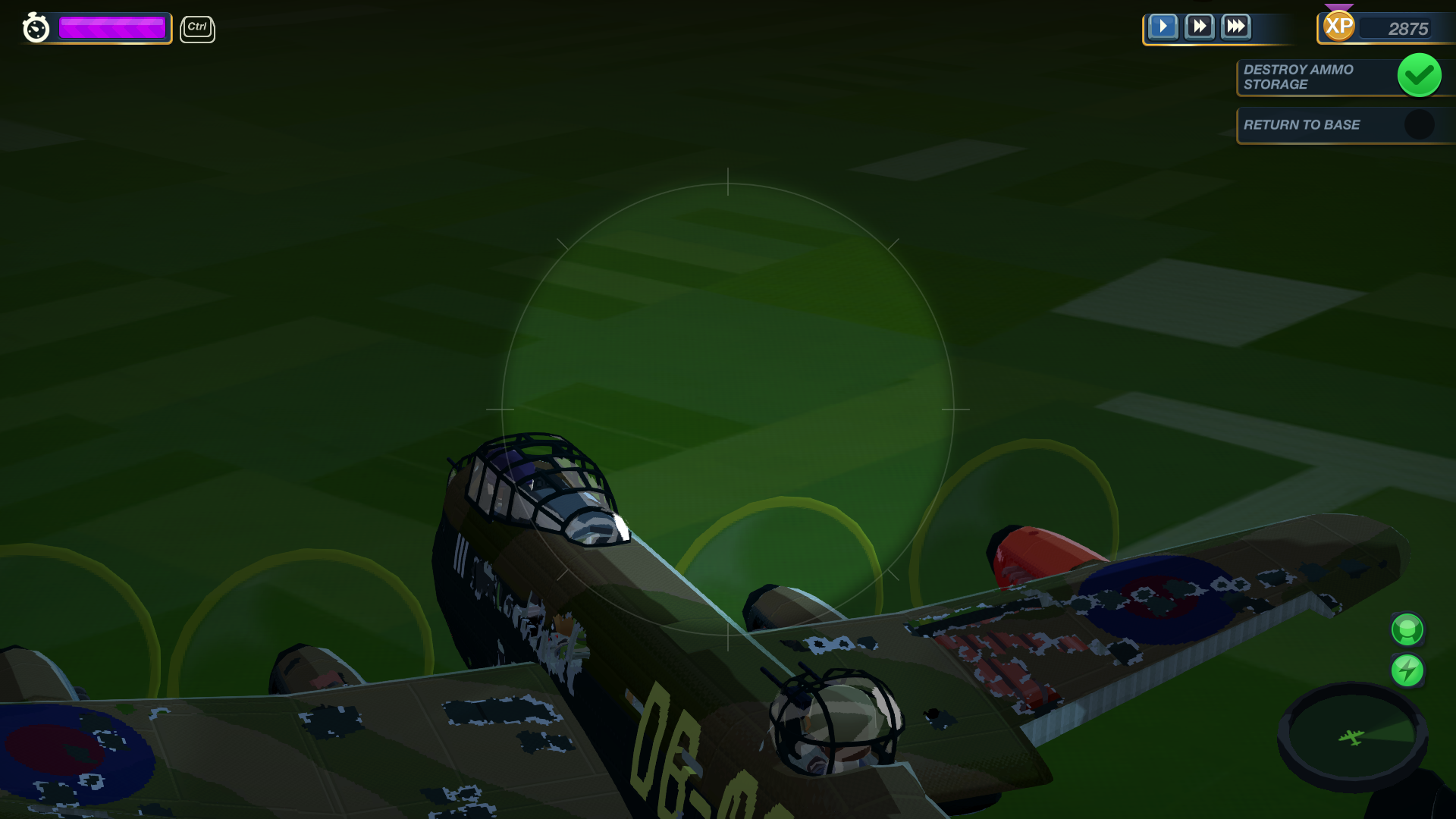 "Skipper. Port side aileron is in France" Caferacer 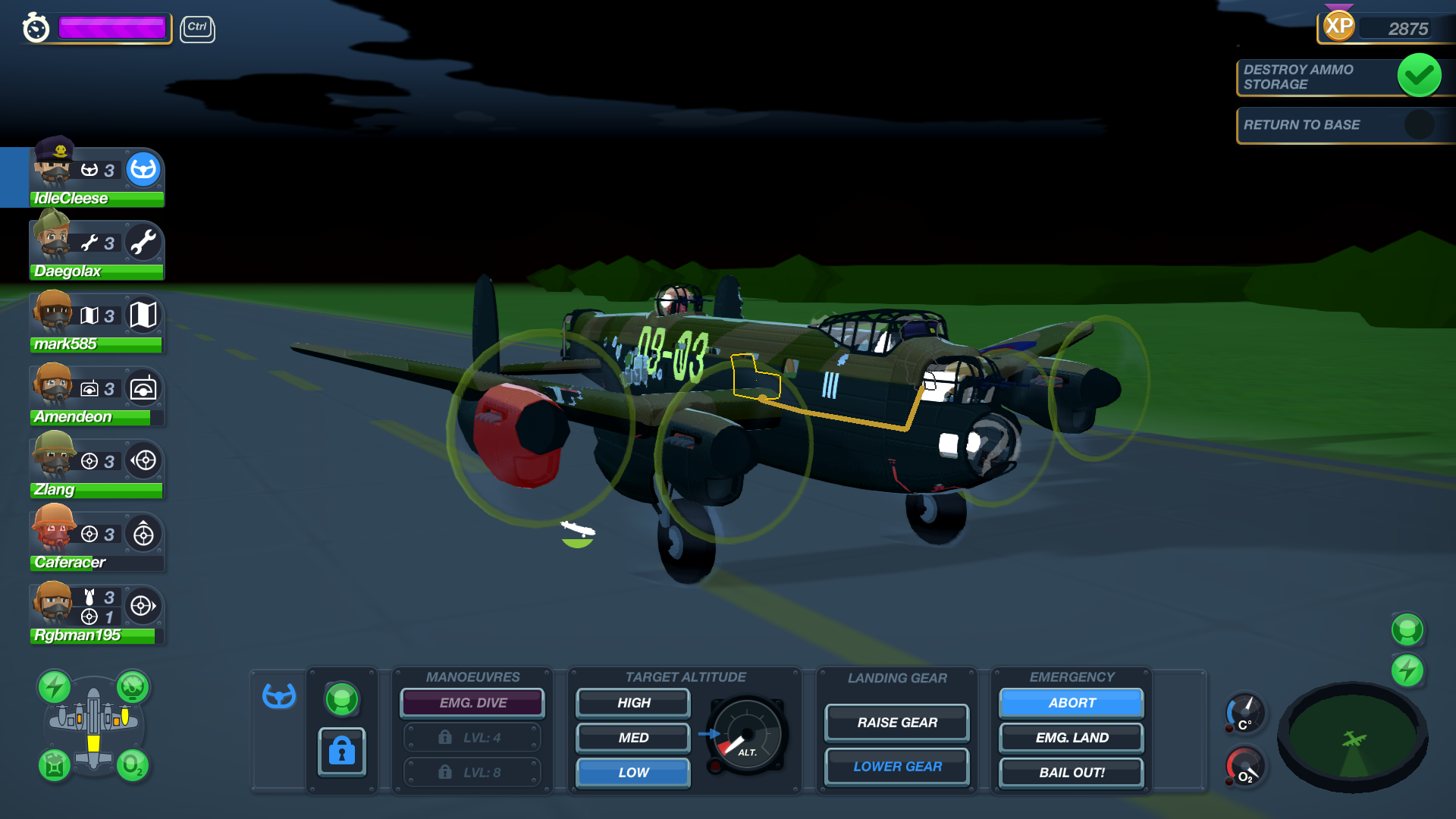 "I can still land this ol' chap!" IdleCleese 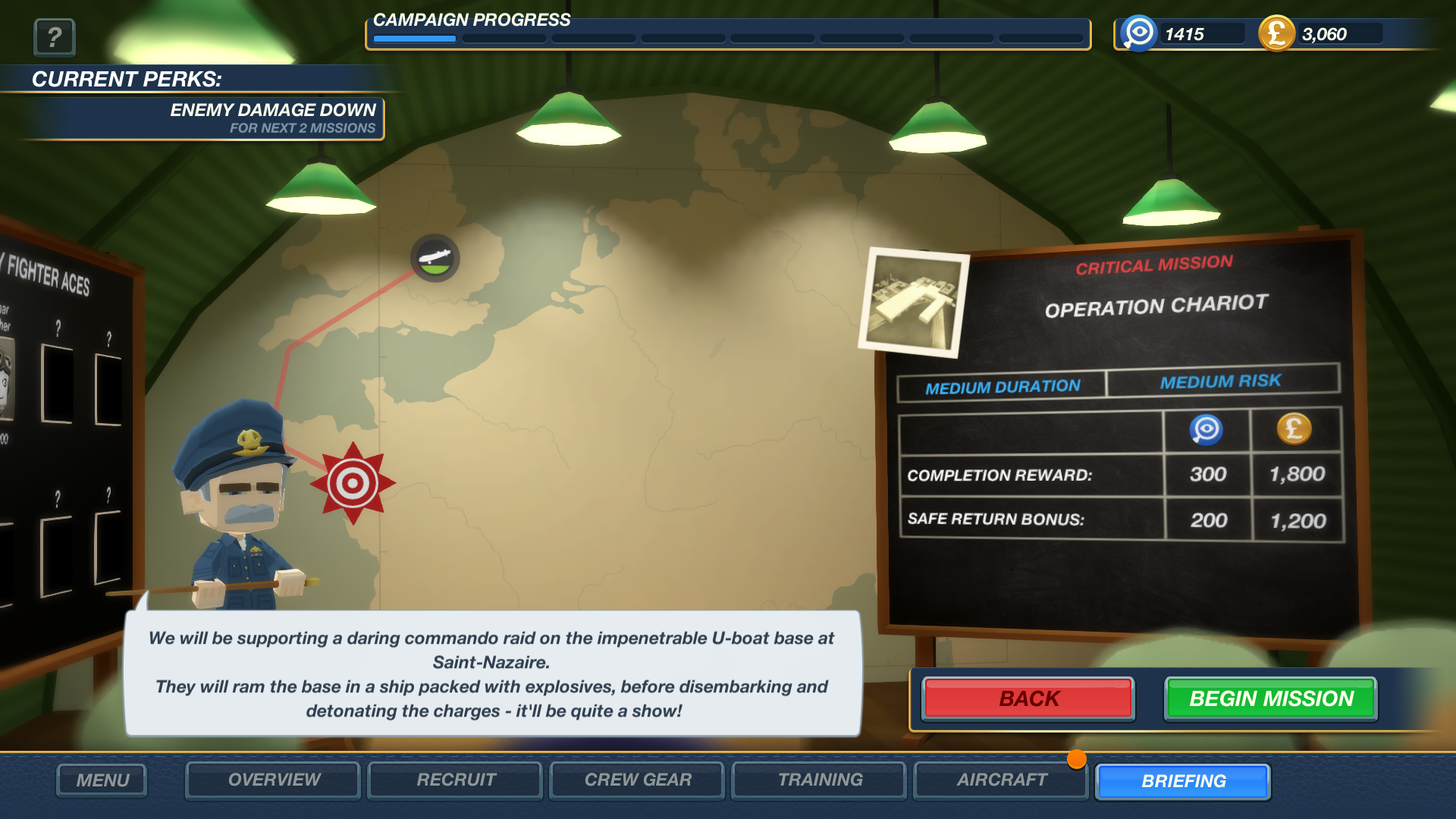 Mission 5. Captain's log. IdleCleese's warning was on everyones mind as we took of and headed to South-West England. We met the commando-ship and continued together to St. Nazaire. We encountered enemy U-boats and fighter planes and managed to sink and shoot down many. Zlang was pleased with his new tail gun that had automatic ammo-feed: now he could spray bullets nonstop. We bombed the coastal defences near St.Nazaire and watched the explosive-ship hit the gates of the dock. Good show! We then made our escape home, but had difficulties along the way. Squadron after squadron of enemy fighters made holes to our plane. Zlang was wounded so Daegolax had to revive him. While Zlang was unconscious Caferaces also got wounded. Amendeon was ordered to revive him and Rgbman took control of the top turret. We were heading north and tried to get some altitude and evade bullets. Zlang woke up from coma and manned the tailgun and started his vendetta. Last of the enemy fighters were down and everyone was back alive -But do we have enough petrol? Daegolax had to adjust the mixture and we managed to return to England in one piece. Marvelous show! We did it! We can only expect more difficult missions and possible casualties. 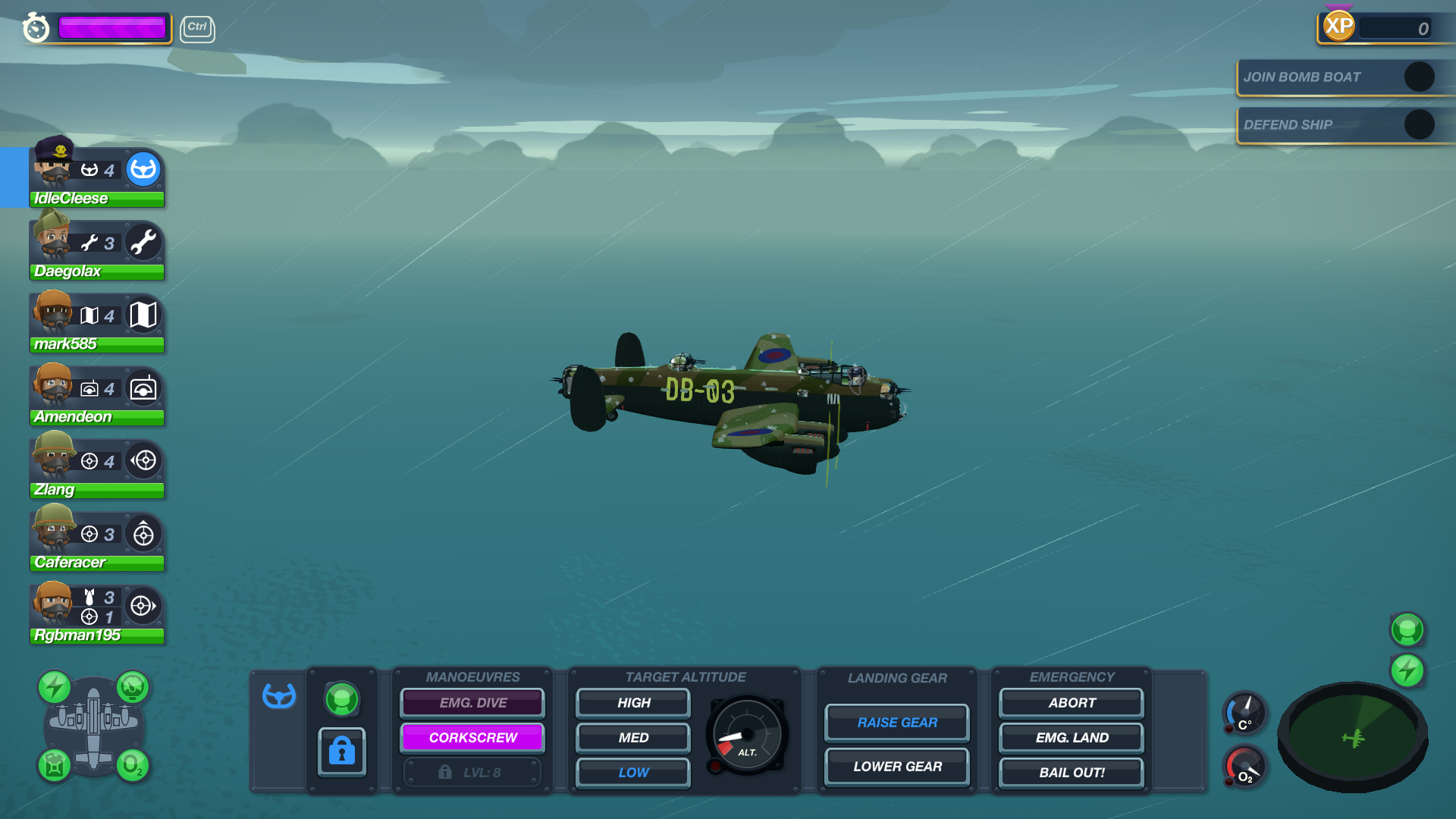 "It's a wonderful day to die... I mean fly", IdleCleese 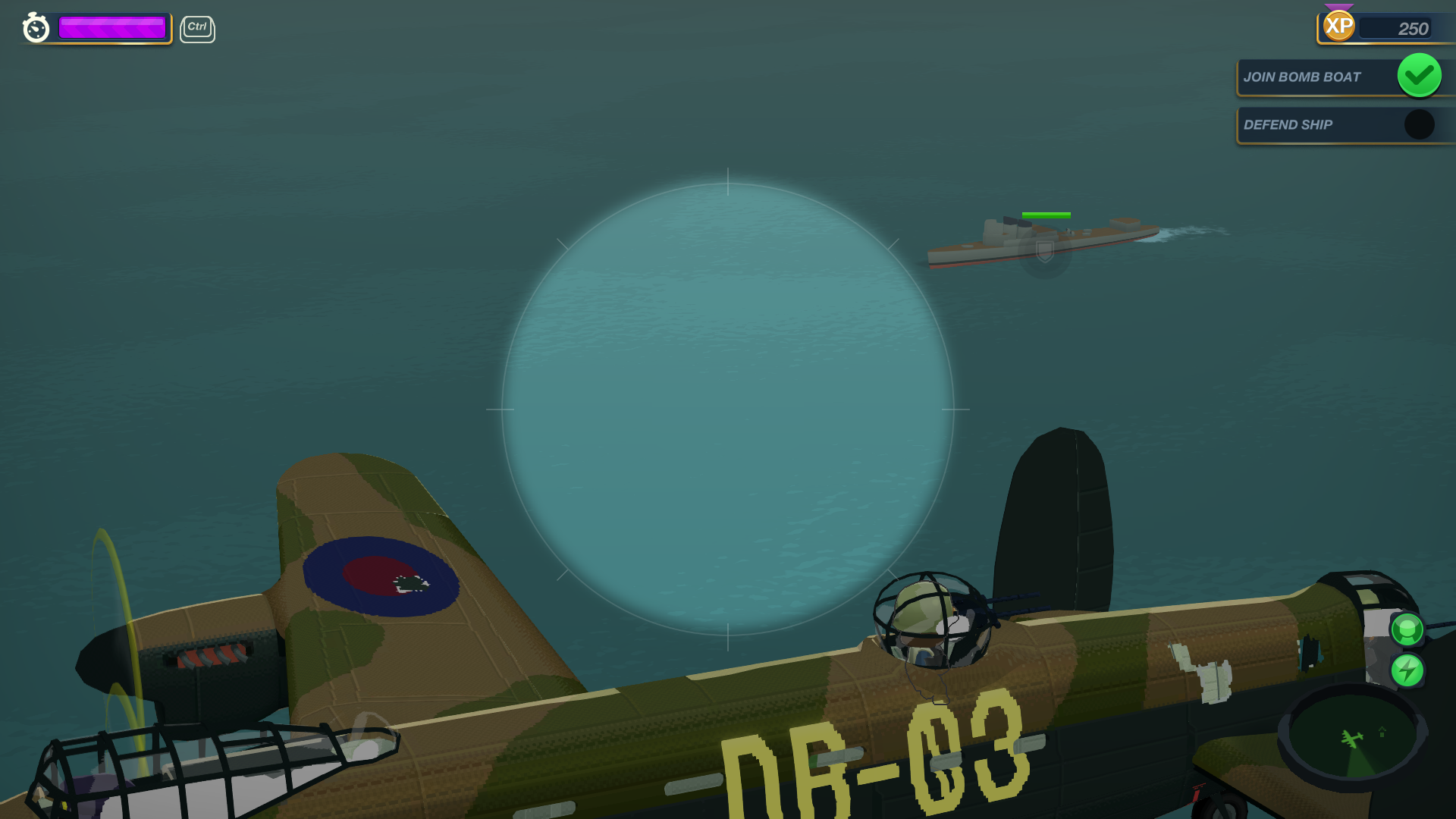 Photo of the ship 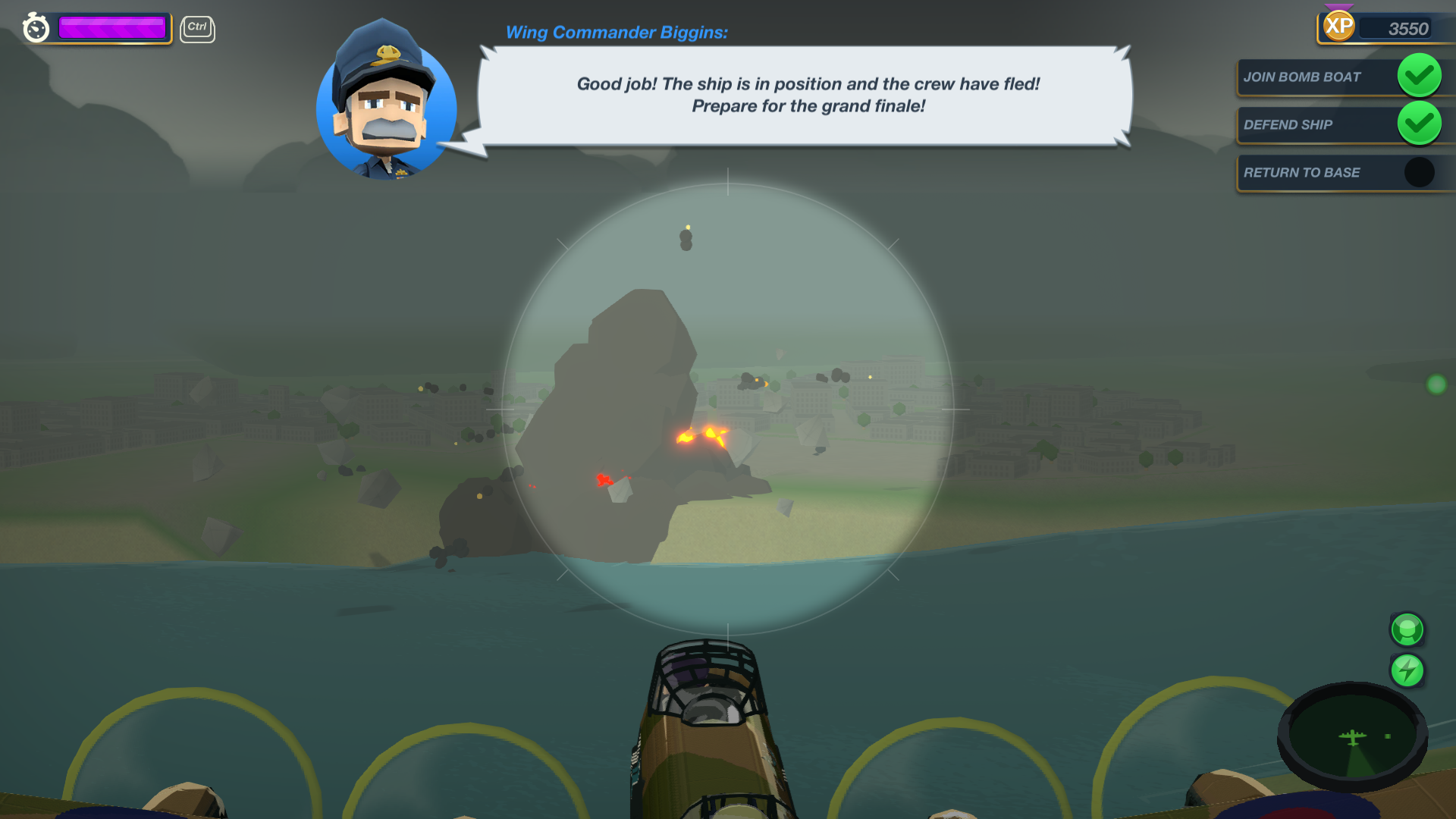 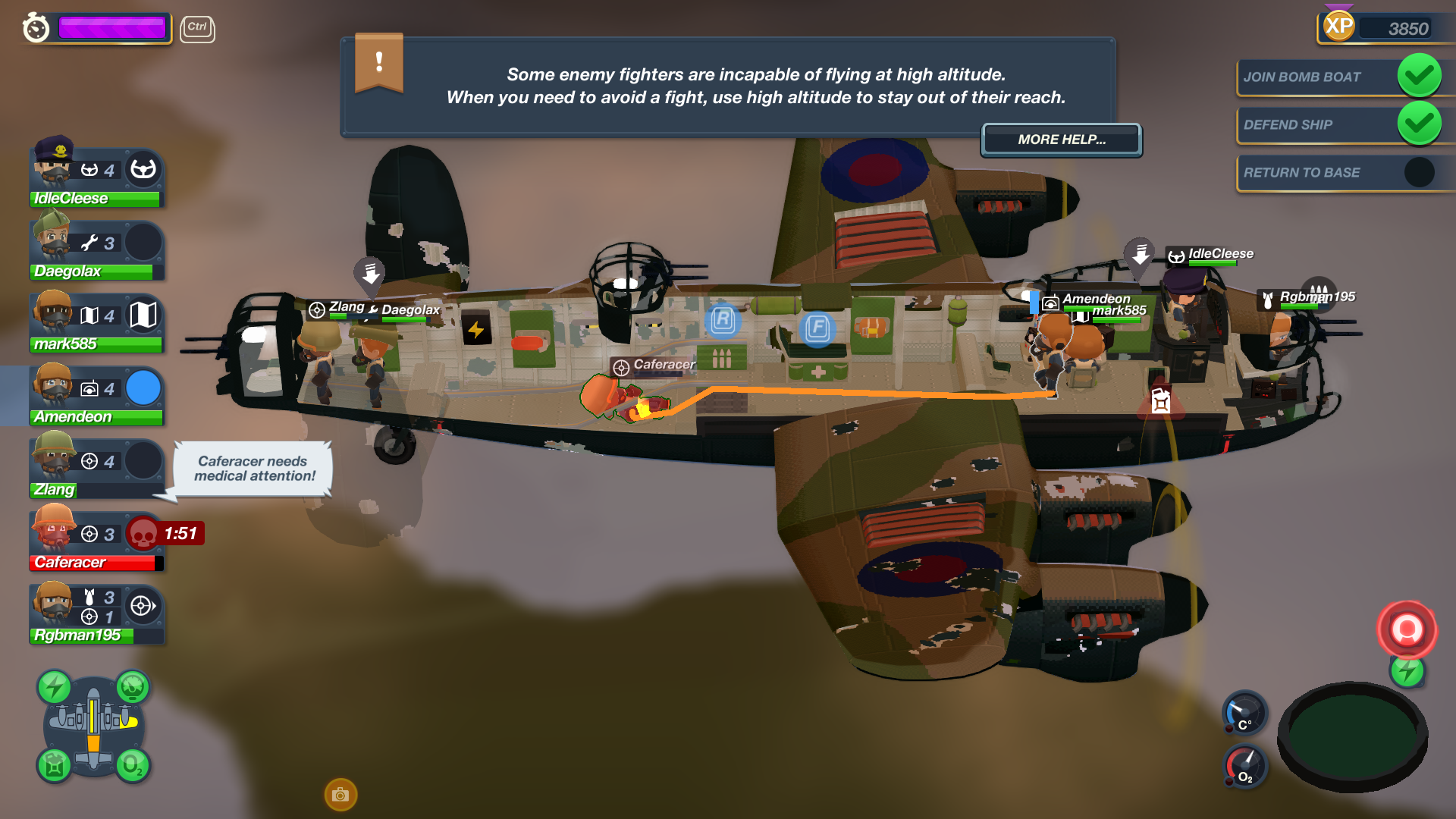 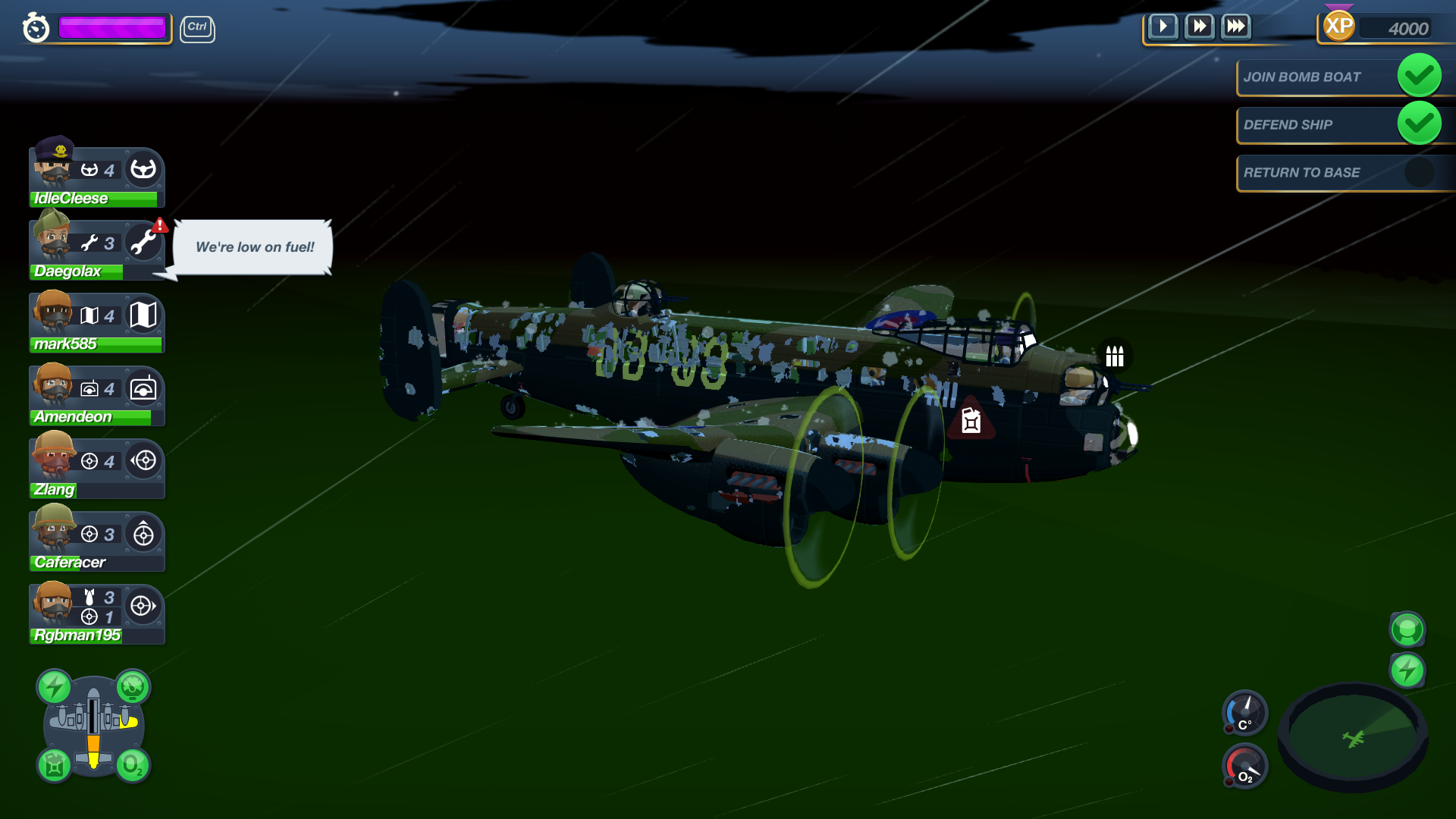 Is there a spot on our plane that doesn't have a bullet hole?
Top

Mission 6. Captain's log. Our target for tonight was an ammo dump facility something near Brugge. We flew under the cover of darkness, but enemy 109s found us and our gunners had some work to do from the very beginning of the mission. Rgbman delivered the bombs precisely. Amendeon informed a new target that needed some recon photography so we headed there and took a nice photo of that factory. Enemy fighters were harassing all the time and tracer bullets from the ground were making low altitude too hot. We turned north and climbed to mid altitude. Mark585 lost our bearing so we were flying north for some while and kept fighting against 109s. We dived and dodged some bullets and when we were back in low altitude, mark marked us on map somewhere close to Hull. We turned to our base and the enemy fighters ran away. Perhaps they thought Spitfires would rescue us or something. Fat chance! 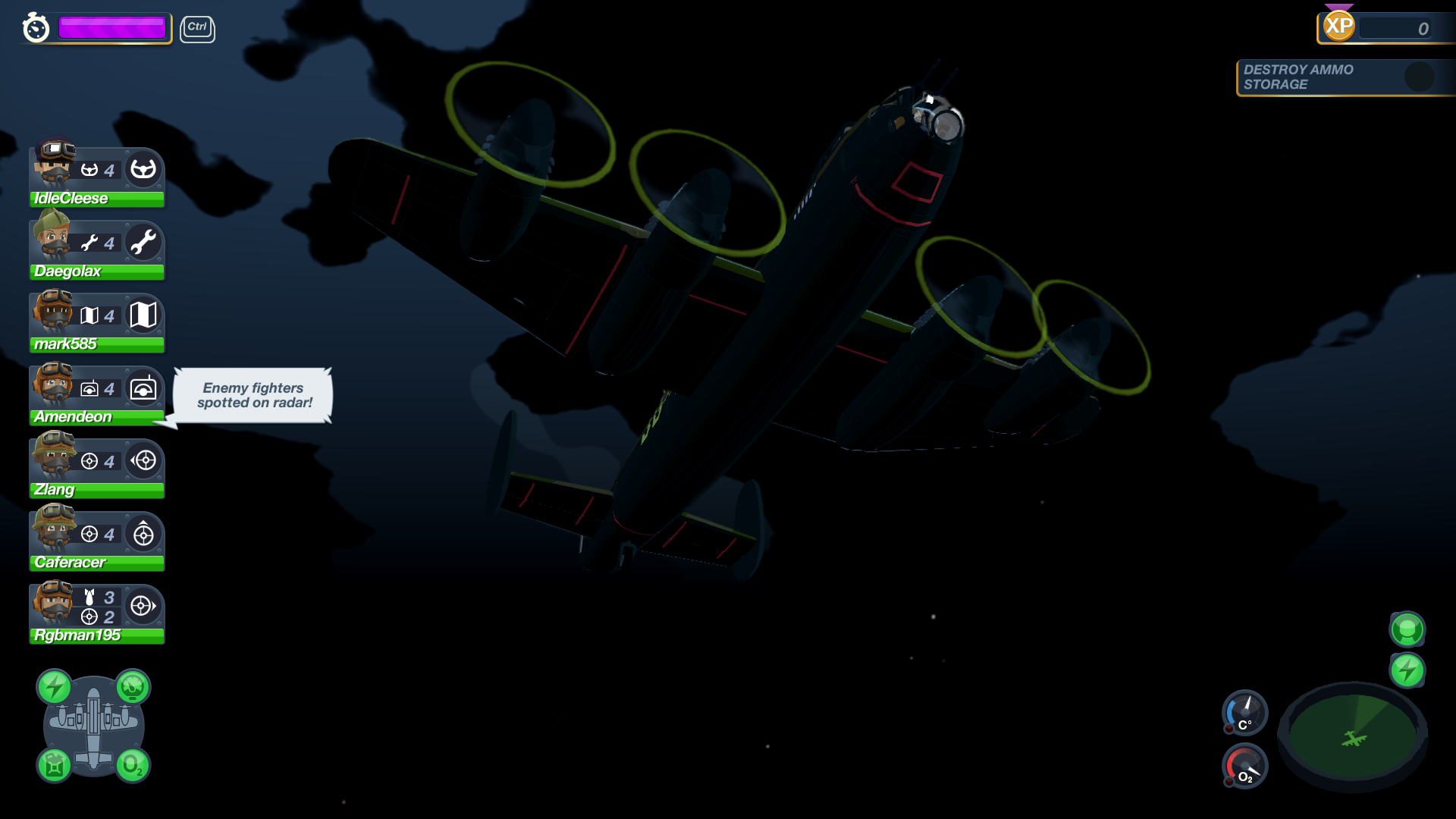 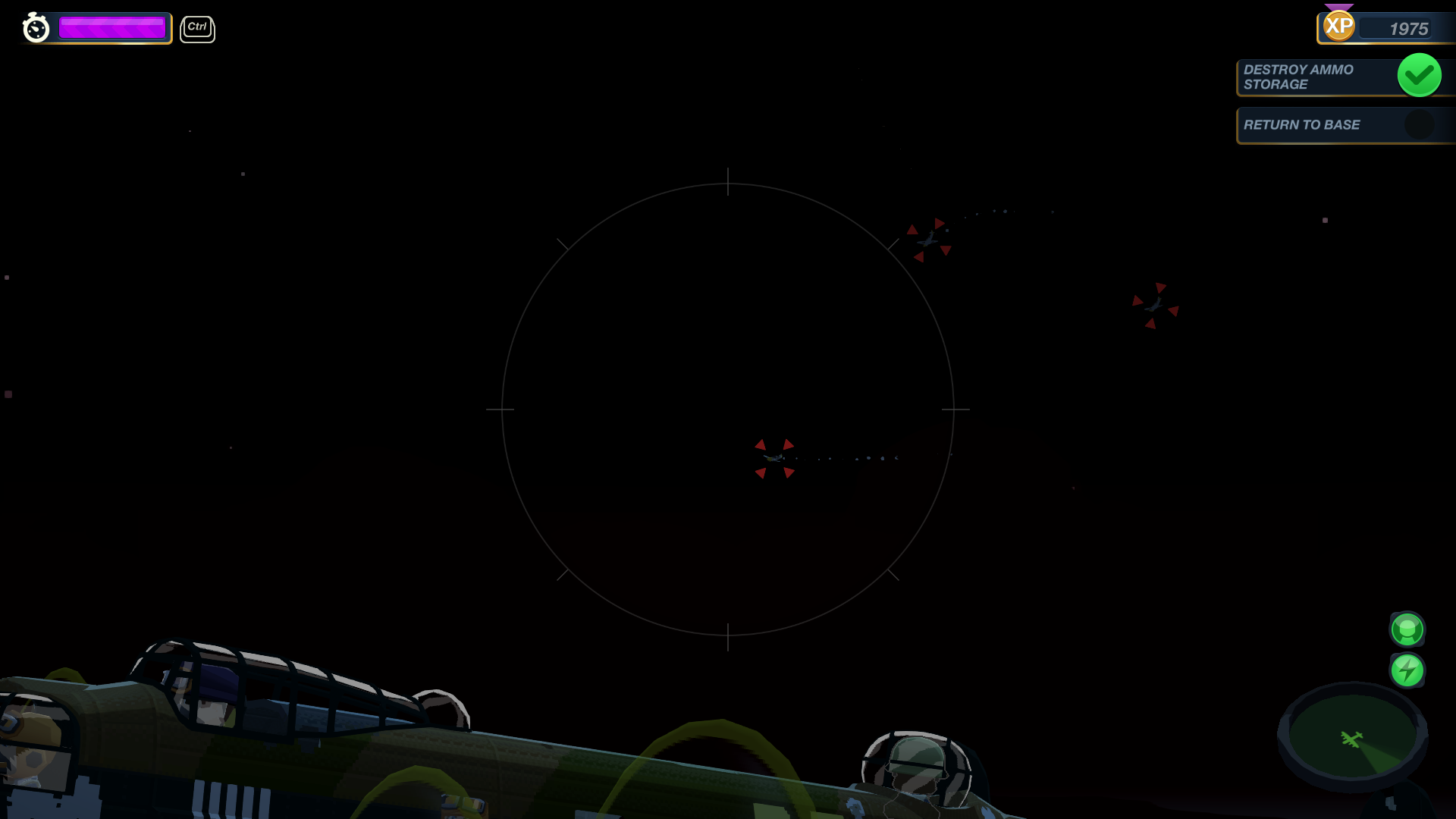 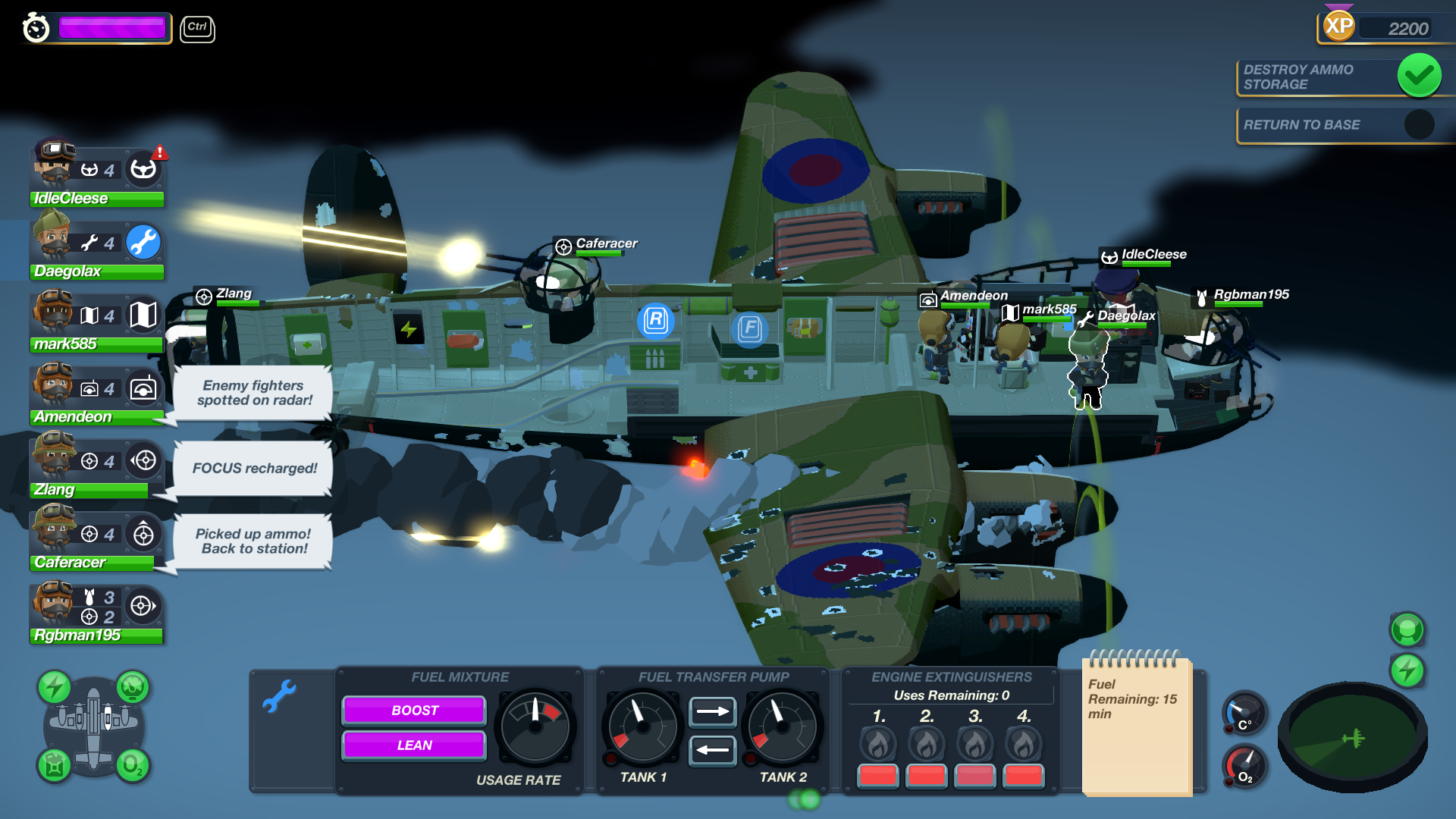 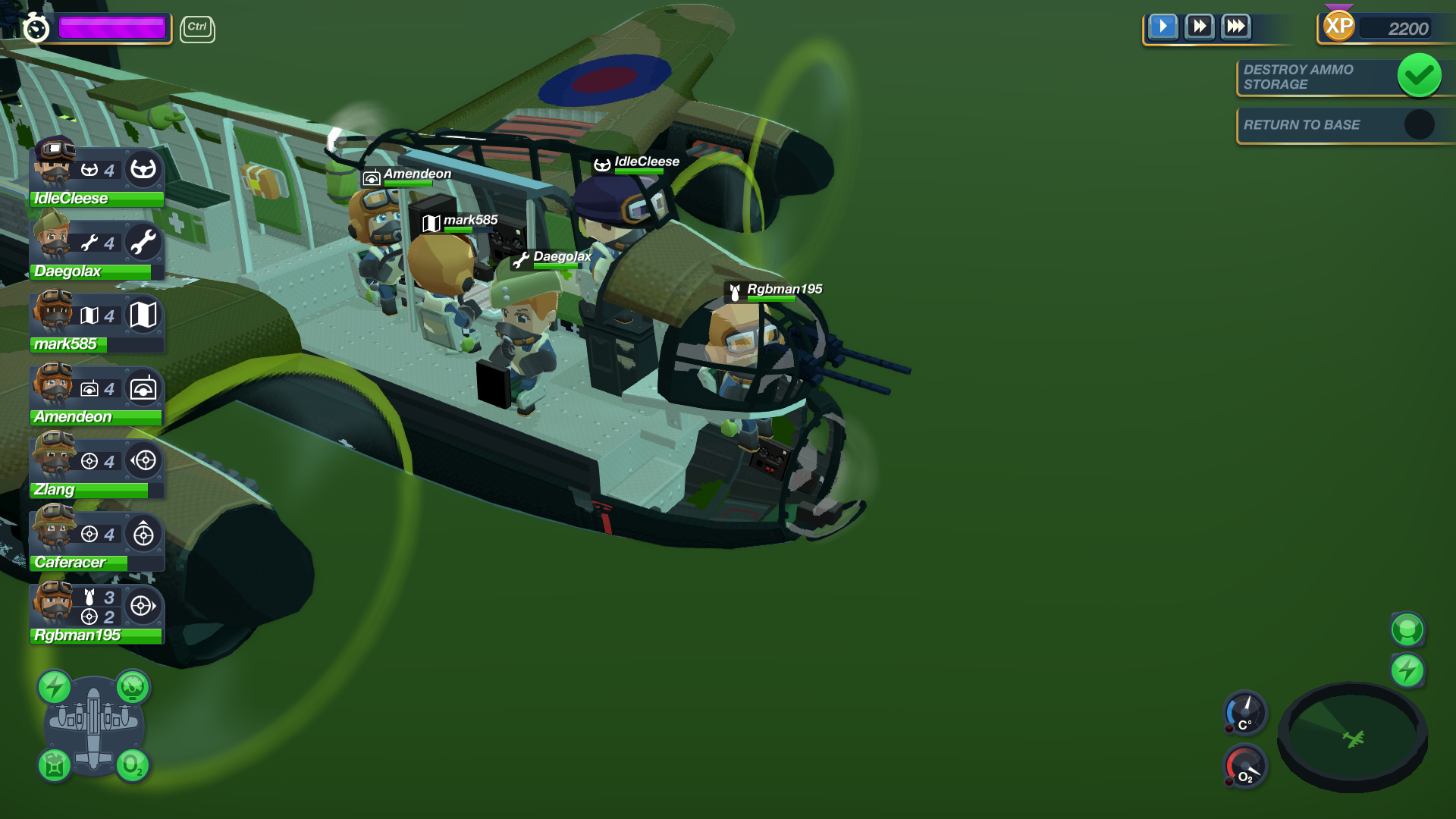