I was going to ask a vet this but they probably get asked all the time, what are your M1919 modifications?

I want to upgrade mine but don't know what upgrades to pick.

Not a Vet and not lucky enough to own the 1919 yet, but I'd say as the gun does mental damage already, I would try to make it as precise and possible with as much stabalisation as I could get.

That's me hoping for a discussion

I like the M1919 with just the lightened spring and the steel barrel.
It´s cheap to maintain, doesn´t require specific badge to help with the handle, capable of snipes at medium range and some other pros.

IdleCleese is the best machine gunner that we have here, he can give you some advise.

Sights, field trigger job, lightened spring and barrel I think these were the best mods on m1919.

I have no idea what I am doing

WmXLT wrote:Sights, field trigger job, lightened spring and barrel I think these were the best mods on m1919.

I use to run mine like this, then i figure out that for my play style i didn´t need the trigger for the extra rof and instability, and the sights just put your first shots i bit higher. but that is for my play style, you really need to play around and test stuff that fit´s you the better.

Lately it seems more ROF the better it is. with high ROF you will have higher chance to hit the target and kill it. Statistics show that Germans use a lot of high ROF on MG42.

High damage seems nice, but the time it takes to kill is higher than on high ROF and lower damage. So the mods you have on that picture would be how I would go. I would also the Stainless steel barrel.

I am not much of fan of ROF but at this state of game it works better. 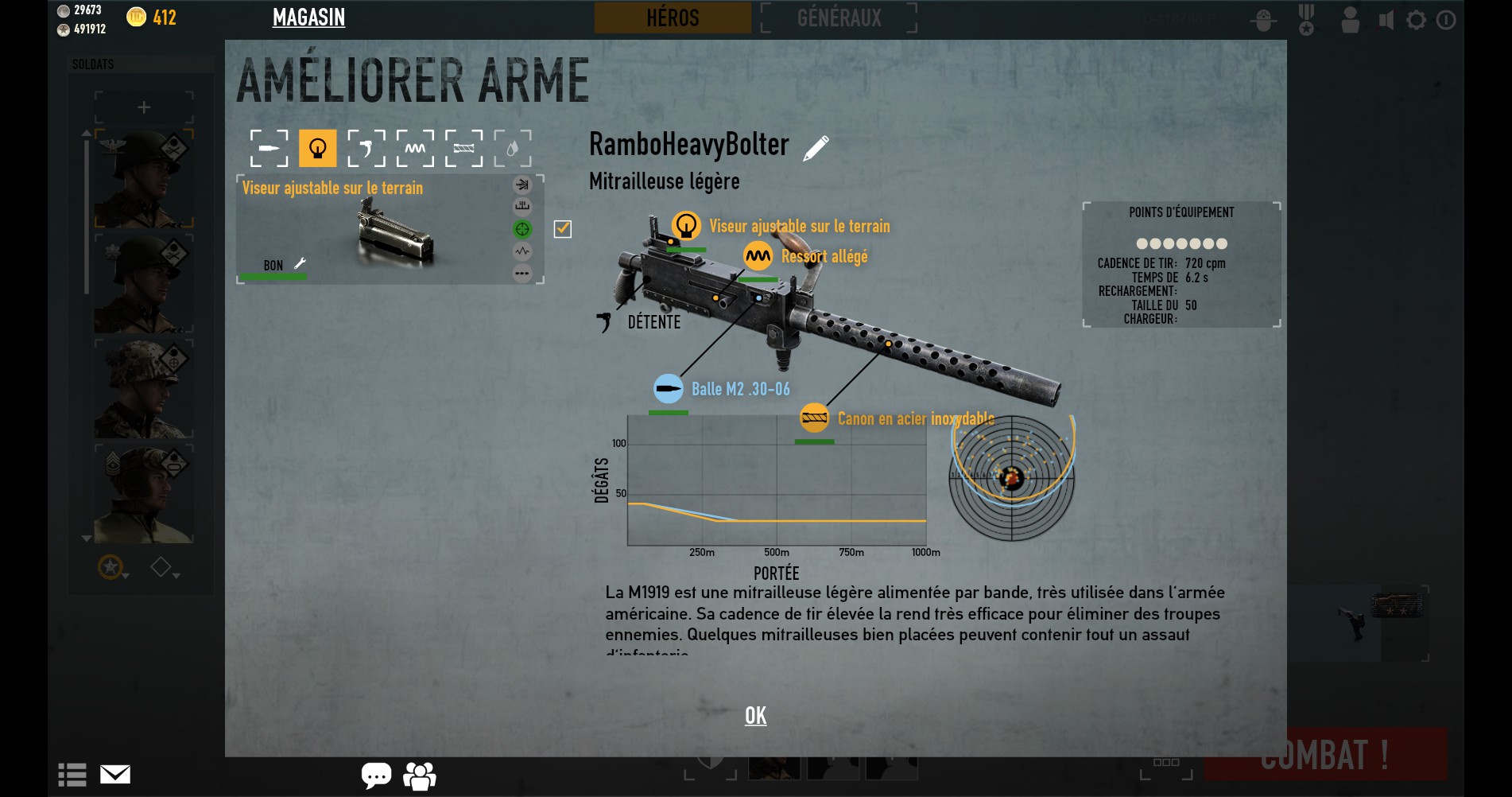 I both that bucket of shit MG before couple days I take with three upgrades barrel trigger and spring, and I can say what a fucking waste of money.
Sight is complete shit, 75% screen in front of me its sight cant see enemy. Thats my opinion Johnson is slice better so my advise is go for Johnson.
Want to join an Allied clan? Click Here or the Image below!

dexter1984 wrote:I both that bucket of shit MG before couple days I take with three upgrades barrel trigger and spring, and I can say what a fucking waste of money.
Sight is complete shit, 75% screen in front of me its sight cant see enemy. Thats my opinion Johnson is slice better so my advise is go for Johnson.

Johnson is a good choice, but to say M1919 is shitty is a bit radical to me, I do love this gun !!! Almost 8000 kills with, and still in love with!
I understand that many players are hating those sights, MG42 definitively have better sights.

1/To look around me, I don't use M1919 sights so much for inspection, prefer the Colt.45 one, it provides a little zoom and a clearer vision than M1919 sights
2/I only pick 1 magazine for the colt, this way it won't weigh anything, 1slot used, stamina saved! Can possibly save your life if surprised while reloading MG
3/Googles, it helps to "scan" an area before moving, or killing

My best ranged shot with M1919 was up to 1300meters on airfield, headshot, so don't complain about thoses shitty sights, and train it !!!!

For example, I'm okay to say that in a context of a duel GreaseGun vs MG42, the MG42 user have a clear advantage, but what if GreaseGun user is knowing his gun? I mean moving/positionning/barrel swaying (so much peoples often forget about barrel swaying)/recoil handling, he headshot in less than 3/4 shots, but he doesn't have no choice, if he fails (like shootin in walls around) MG42 user will sure punish him by a short and deadly burst

I do perform a 11 kills streak with stolen vanilla PPD40 last week, I jumped out of my broken tank to face a grenading russian and killed him with my carbine, then I took his gun and have my time with, PPD40 with no mods is a bit shitty, hard recoil, big dispersion, low rpm.. but you got 71 rds magazines, so I did manage to not side shift to much while shooting (reduce the sway), giving shorts bursts, and crouching as much as possible, it worked during those 11 kills, after that I got my head chopped off by a low flying airplane (don't want to talk about this anymore

All this to say, there is no useless weapons in this game, nor shitty, it's just the way you use each of them, and the day you really understand the M1919, your life come brighter ^^
Top